Squamous Cell Carcinoma (EEC) accounts for approximately 20% of all horses and mucocutaneous tumors is a therapeutic challenge for professionals. In this paper two cases, one of a horse, Belgian race male 15 years, which was referred to the Veterinary Clinic U.D.C.A. to present lesions on the skin of both nostrils and an abscess in the submandibular space with several fistulas and a female of the same breed of 18-year-old, who had a mass medial edge of the right eye with lacrimation, She was treated by enucleation of the left eye about 8 years ago. Both patients undergo histopathological analysis of affected tissue in which squamous cell carcinoma was found. As treatment, the male he underwent excision, cryotherapy and antibiotic therapy. In the case of the female, surgical removal of the mass was performed. In the evolution of the male after two interventions performed with cryotherapy, improvement of the lesions in his nostrils was evident, however in the submandibular area there was an incomplete resolution, the other patient revealed no abnormalities good performance after intervention. 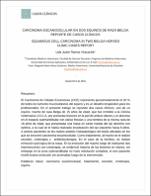