The present investigation concerns the study of the synthesis conditions for the majority obtaining of the compound Trioxydizirconyl Bis-(2-ethylhexanoate) (Bis-TDZ) in the competitive reaction with Zirconyl Bis-(2-ethylhexanoate) (Bis-Z); Using ZrOCl2 and 2-ethylhexanoic acid as starting materials. Bis-Z is a compound used as a catalyst in auto-oxidation and polymerization reactions; Bis-TDZ is the by-product that is formed during the synthesis of Bis-Z by the non-induced dimerization of two zirconyl cations (ZrO+2). The main characteristic of both compounds is their functionality as a catalyst, which is given by the zirconium atom. The Bis-Z molecule has a zirconium atom in its structure, while that of the Bis-TDZ has two zirconium atoms, which theoretically represents twice the catalytic power.The methodology for the development of the experiments initially consisted of a pre-experimentation, where the Bis-Z compound was initially manufactured starting from the stoichiometric amounts of ZrOCl2 and 2-ethylhexanoic acid, in order to observe the behavior of the reaction without have previously synthesized the trioxydizirconyl dimer (Zr2O32+). Subsequently, the synthesis of the compound was performed using the same amounts of reagents, in this case the ZrOCl2 was previously reacted with the stoichiometric amount of Na2CO3 to obtain the precursor Zr2O32+. The results of the pre-experimentation served as a comparison parameter in the experiment, and based on these, an experimental methodology was proposed based on a complete factorial design with no replicates, in which two factors were studied at four levels each: carbonate for synthesis of the precursor (Na2CO3, K2CO3, (NH4)2CO3 and NaHCO3) and molar ratio Zr / 2-ethylhexanoic acid (1.0 mol Zr / 1.0 mol Acid, 1.0 mol Zr / 1.1 mol Acid, 1.0 mol Zr / 1.2 mol Acid, 1.0 mol Zr / 1.3 mol Acid). From this design we obtained 16 experiments. The overall performance of the process was used as a criterion for comparison. The best results were selected for evaluation and analysis of the compound obtained. The product with the highest performance was that corresponding to the treatment that combines K2CO3 and molar ratio Zr / Acid 1.0 / 1.2 (yield = 98.4%), this treatment was replicated to validate its reproducibility (Yield = 98.6%). This compound was obtained in the solid state as the synthesized reference compound; both samples were sent to infrared spectroscopy analysis. The IR spectrum of the compound obtained with the highest performance treatment shows two absorption bands at 474 cm-1 and 440 cm-1 corresponding to the symmetrical and asymmetric stretching of the Zr-O-Zr bonds. This signal, which does not appear on the IR of the synthesized reference compound, is attributed to the ether linkage of Bis-TDZ 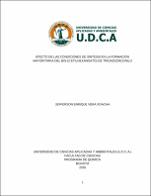