It was performed in a clinic III level of the city of Bogota tracer study drugs RAM in order to justify the implementation of a pharmacovigilance program at the clinic, patients hospitalized for it on floors 7-8 took -9 hospitalization service, besides that emergency patients and ICU who have been prescribed one of the tracer drugs chosen for the study took into account patients who met the features mentioned above and have been hospitalized in the periods between August and September 2015, at which time the study was conducted, the results obtained in this, threw us that of the 132 patients who initially had only 17 of them were prescribed any medications to treat a RAM filed, the other patients were prescribed for a different pathology to the interest of the study, these patients were analyzed both causality, seriousness and type of ram was presented, realized all this, it was concluded that the most effective drug found in the study was the naloxone with 100% effectiveness, followed by vitamin k with 24%, hydroxyzine with 19%, clemastine with 11% and hydrocortisone with 9%, it is recommended to continue with tracking reported cases and extend the program to other services that are within the clinic. 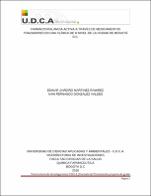