Non-rational use of medicaments is a problem that involves inadequate practices of prescription, dispensation and administration of them. Additionally it implies unnecessary expenses which bring consequences that can harms patients such as increasing the incidence of adverse reactions. In order to intervene and prevent the problematic, these practice must be studied, being the reason to carry out this project, which aimed to evaluate the recommendations of use of medicines in drug stores in municipality of Chia, Cundinamarca.The symptoms description of flu and diarrhea of 37 random drug stores in the municipality, and asking which drugs were recommended was the design of the simulation purchase - employee. A technique that permitted the data collection about the behavior of the dispensers on this situation. As a result it was found that more than 80% of the establishment recommended some medication within beside of the off counter drugs, 13% of them were drugs under medical recipe, mainly were anti-infectivea and anti-emetic. On the other hand, regarding the information and guidelines provided by dispenser, especially the dosages, in any situation the information was based leaflet and labels. This demonstrated that the drugs recommendation is a practice dispensing despite it being banned for dispensers in the country, is performed in most drugstores in the municipality of Chia, a situation that should be better controlled in order to contribute to the rational use drug 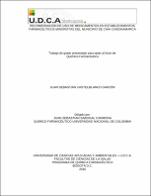