In order to characterize the in vivo lesions in the nasal cavities and lungs, twenty-eight rabbits were intranasally instilled with lipopolysaccharide (LPS) from P. multocida and then divided into seven groups according to euthanasia time. The nasal cavities and the lungs were processed for light microscopy, lectin histochemistry and transmission electron microscopy. Increased goblet cell activation and neutrophil infiltration were relevant changes in the nasal cavity. A predominantly interstitial pattern of diffuse alveolar damage and bronchopneumonic foci were the main lesions found in the lungs. LPS was found in the cytoplasm of ciliated cells, goblet cells, glandular cells, venular endothelial cells and neutrophils in the nasal cavity and in club cells, capillary endothelial cells and neutrophil in the lung. This study demonstrates that the LPS is able to cause lesions in the upper and lower respiratory tract, it binds to and is internalized by respiratory epithelial cells. Furthermore, it also traverses the intercellular spaces to reach the blood vessels, where it binds to and is internalized by neutrophil and red blood cells. These cells may then travel to the lungs where the LPS induces typical diffuse alveolar damage. This route of lung interstitial damage, to our knowledge, has not been described for this molecule or any known pathogen. 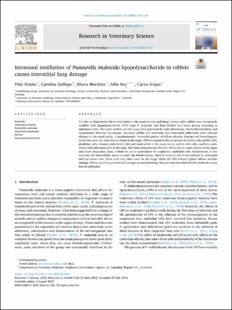