The use of selection indexes optimises genetic and economic gains in a population. The objective of this study was to propose and compare selection indexes built with economic and statistical methodologies in Colombian Creole Blanco Orejinegro breed. Genetic, phenotypic and economic information of the breed were used to design and test the selection indexes. The weights of each selection criteria (weight at 24 months of age, age at first calving, calving interval) were estimated using phenotypic variances, eigenvectors from a principal component analysis and economic values obtained through a deterministic bio-economic model. The selection criteria with the highest weight was weight at 24 months of age, with values of 0.56 and 0.034 USD using eigenvectors and phenotypic variance, respectively. The calving interval had the highest weight using the bio-economic model, with a value of -1.3 USD. The greatest profit due to genetic selection was obtained using the economic values as weights, which increased the average expected profit to a value of 18.76 USD/cow/year. The selection indexes calculated from phenotypic and eigenvectors do not rank animals similarly to the economic selection index. It could generate less genetic and economic progress in the national selection programme for the Blanco Orejinegro breed. 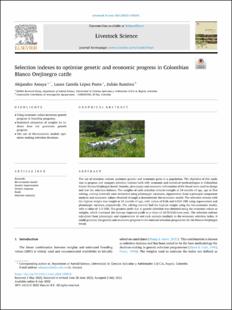