Climate extremes and their impacts on agriculture across the Eastern Corn Belt Region of the U.S.

The Eastern Corn Belt Region (ECBR) is an important agricultural sector for the U.S. This study analyzes the climate extremes over the contemporary (1980–2018) and future (2036–2099) periods over the ECBR. We evaluated the performance of 32 downscaled models from the U.S. Global Change Research Program's Localized Constructed Analogs (LOCA) of the Coupled Model Intercomparison Project (CMIP5) to simulate extreme temperature and precipitation indices. The LOCA downscaled models were evaluated for the recent past against the National Aeronautics and Space Administration (NASA)-supported gridded observational dataset DAYMET. Results reveal key trends throughout the region that are consistent with previous studies, including significant increases in extreme minimum temperatures, reduction of cold nights, increase of warm nights, and decreases in diurnal temperature ranges. Much of the region demonstrates extreme warming trends in the coldest night of the year (more than 5 °C) and an increase in the heaviest precipitation events over 1980–2018. An optimal model ensemble (OME) was constructed using a Kling-Gupta Efficiency and Bhattacharyya coefficient evaluation to construct a comprehensive ranking procedure. Having outperformed a standard multi-model ensemble approach, the OME was used to evaluate the future changes of extreme climate indices under RCP4.5 and RCP8.5 scenarios. Though the OME showed consistently strong warming throughout the ECBR, variability among the optimal models and across watersheds is quite significant, especially for precipitation indices. Thus, constraining the uncertainty in future climate models, specifically as it relates to agriculture decisions that support climate-resilience, remains a challenge. 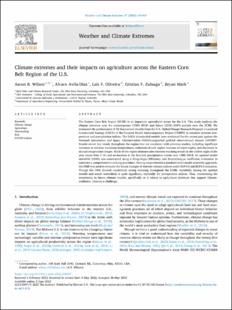