The purpose of this study was to determine the mean propulsive velocity (MVP) at various percentages of one repetition maximum (1RM) in the full squat and chest press exercises. A total of 96 young women and 256 young men (recreational athletes) performed an incremental test (50–60–70–80% 1RM) comprising the bench press and full squat exercises in two different sessions. The individual load and velocity ratios were established through the MPV. Data were analyzed using SPSS software version 25.0, with the significance level set at 5%. The following findings were revealed: highly linear load-velocity relationships in the group of women (r = 0.806 in the squat, and r = 0.872 in the bench press) and in the group of men (r = 0.832 and r = 0.880, respectively); significant differences (p < 0.001) in the MPV at 50–70–80% 1RM between the bench press and the full squat in men and at 70–80% 1RM in women; and a high variability in the MPV (11.49% to 22.63) in the bench press and full squat (11.58% to 25.15%) was observed in women and men (11.31% to 21.06%, and 9.26% to 24.2%) at the different percentages of 1RM evaluated. These results suggest that the load-velocity ratio in non-strength-trained subjects should be determined individually to more precisely establish the relative load to be used in a full squat and bench press training program 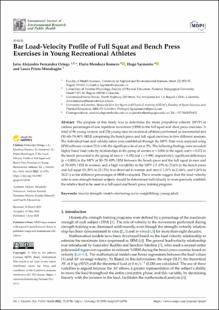