The climate change perspective of photovoltaic power potential in Brazil

Photovoltaic power potential (PPV) is part of the strategies in Brazil to satisfy the population's energy demand and contribute to reduction of global warming in the climate change context. This study assesses climate change's impact on PPV using a set of 47 state of the art Earth System Models from CMIP6 under two climate change (SSP2-4.5 and SSP5-8.5) scenarios. Changes in solar radiation, temperature and PPV are calculated for the near-term (2021e2050) and end-century (2071e2100) future, concerning the historical period (1981e2010). For the future, the sign of climate change is consistent in both scenarios, but with more intense magnitudes in the SSP5-8.5 for the end-century, and indicate a brightening in North region and warming in the whole country. For the near-term future, PPV projects the maximum increases (z3%) in the North under both scenarios. The most notable decreases in PPV are noticed by the end-century ( 5%) over the country, except for the extreme north. The sensitivity to the increase in temperature of current PPV systems' technology would not allow increases in the yield of PPV, canceling the positive effect of the brightening. 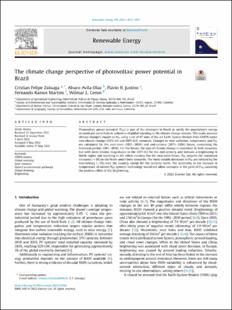