The purpose of this study was to evaluate the strength of the knee flexors and extensors and hip abductor and adductor muscles in young soccer players. Twenty-three male under-19 soccer players participated in this study (age: 17.7 ± 0.2 years; height: 173.0 ± 1.1 cm; body mass: 66.1 ± 1.3 kg). Body composition was measured using a bioelectrical impedance (InBody770), and the dynamometry was performed by an isokinetic dynamometer (Biodex System 3) for knee flexion and extension, and by an isometric dynamometer (Smart Groin Trainer), for hip adduction and abduction. Comparisons were made between dominant members (D) vs. non-dominant members (ND) and adductors vs. abductors (ADD:ABD) using the Wilcoxon test. There were statistically significant differences in the peak torques between the dominant and non-dominant members in the flexion function (Z = −4.198, p < 0.01) and in the extension function (Z = −4.197, p < 0.01) of the knee in concentric muscular action, and the flexion (Z = −4.198, p < 0.01) and in the extension (Z = −4.198, p < 0.01) of the knee in eccentric muscular action. No statistically significant differences were obtained in the conventional ratio (Z = −0.456, p = 0.648) nor the functional ratio (Z = −0.335, p = 0.738) between D and ND members. There were no statistically significant differences between adductors and abductors at the moment of strength for absolute values (N). The reference absolute and normalized to the weight values and the ADD:ABD can be used as a guideline for classifying players in screening and comparison in return tests to sports practice after an injury. 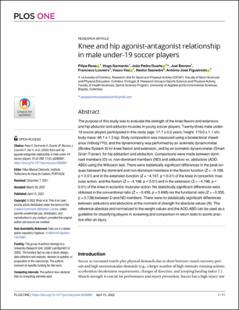