Currently, intensive rabbit production is based on the use of different genetic lines, in which the maximum yield is reached when selection programs females are obtained with high litter sizes and high reproductive longevity. Because in Colombia is very little research being done in cunicultura it had the need for research projects that allow implementing more specialized production systems to increase productivity. In the cunícola "Los Alisos" located in the municipality of La Calera in Cundinamarca department located at 4 ° 43'11 "north latitude 73 ° 58'12" West Longitude. 1,564 records litters and weaning of New Zealand White breed were evaluated and 238 litters and weaning weigths in the Californian breed to estimate genetic parameters on the size of live at born and individual and litter weight at weaning The estimates was developed under a model unbalanced of univariate effects by the GLM statistical procedures and Language Rcmdr high-level programming software packages R. The objective of this research was to estimate the heritability, genetic correlations and repeatability for the size of live at born at weaning and weaning weight in rabbits New Zealand and Californian breeds. Estimates of heritability for traits evaluated were moderate to high in the New Zealand White breed, with a range of 0.27 to 0.63. In Californian rabbits they were low to high and varied from 0.04 to 0.41. Repeatabilities were low, in New Zealand White rabbits ranged from 0067 to 0158 and Californian ranged from 0.01 to 0.10. The genetic, phenotypic and residual correlations between litter size at weaning and individually weaning weight in New Zealand rabbits were -0.47, -0.23 and 0.2 respectively. In Californians rabbits correlations were -0.4, -0.55 and -0.91.Las genetic, phenotypic and residual correlations between litter size at weaning and litter weight at weaning in New Zealand rabbits were 0.57, 0.76 and 0.89 respectively. Californians rabbits in the correlations were 0.99, 0.76 and 0.62.The selection for the litter size and the weight of the litter and then the selection of heavier individuals in large litters increased production levels in this rabbit population. 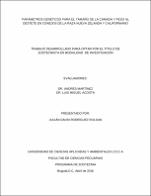