Previous studies have shown that the Atlantic Multidecadal Oscillation (AMO) and Pacific Decadal Oscillation (PDO) have combined effects on the precipitation (PRP) variability over South America. The combined impacts have been assessed considering four mean states as the averages of the variable anomalies during sub-periods overlapping time intervals of the PDO and AMO phases. Since these sub-periods include years under El Niño-Southern Oscillation (ENSO) extremes, the extent to which these years’ occurrence affects the averaged anomaly patterns during different mean states is investigated. The analyses are done for the PRP and surface air temperature (SAT) during the austral winter (June to August) and summer (December to February) of the 1901–2014 period using a composite technique. The nonlinear ENSO response in each mean state for a variable corresponds to the sum of the anomaly composites of the El Niño and La Niña events. In each mean state, the nonlinear PRP and SAT anomalies are not negligible and show similar patterns of the corresponding mean state, with larger magnitudes. For both seasons and all mean states, these similarities are more pronounced for SAT than for PRP. Thus, the ENSO variability affects the mean state’s PRP and SAT anomaly patterns in different ways. As far as we know, analyses of the nonlinear ENSO response of the South American climate during distinct mean states were not performed before. Our results also indicate that the ENSO variability should be considered in the studies of the low-frequency modes and their effects on the mean state over South America. The results presented could be relevant for climate monitoring and modeling studies. 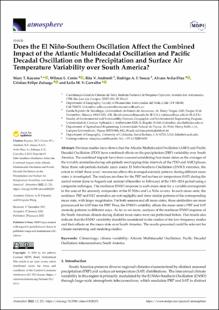