The prevalence of Chlamydia psittaci in confiscated Psittacidae in Colombia

Chlamydia psittaci is a highly zoonotic bacteria distributed worldwide; it is responsible for psittacosis, one of the most important infectious diseases affecting the Psittacidae, mostly parrots. This work was aimed at determining C. psittaci prevalence and genotype in 177 parrots confiscated in Colombia; cloacal swab (166) and faecal (177) samples were analysed from birds confiscated and housed in a Temporary Wildlife Reception Centre (Centro de Reception de Fauna Temporal). Conventional PCR was run on the samples for amplifying the MOMP gene and then the ompA gene. The C. psittaci genotype A was found in 81.3 % (144/177) of the birds analysed. Cloacal swabs accounted for 129/166 (77.7 %) positive samples and faecal matter for 53/177 (29.9 %), 38 birds proving positive for both types of sample; there was an 8.15 times greater probability of detection for cloacal swabs compared to faecal swabs (p < 0.05). Clinical examination findings were correlated with the animals’ positivity for cloacal swabs, faecal matter or both, finding a statistically significant relationship with low respiratory rate (p < 0.05) and broken plumage for cloacal swab sample results (p < 0.1). Even though 85 % seroprevalence has previously been reported in Colombia using indirect ELISA, this study reports for the first time C. psittaci genotype A endemicity in psittacines in captivity in Colombia using molecular techniques, considering the zoonotic risk involved in having these birds as pets. 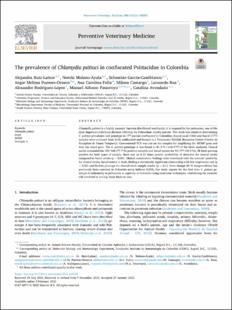