Alzheimer's disease is the most common form of dementia, representing 60-70% of dementia cases. The enzyme acetylcholinesterase (AChE) cleaves the ester bonds in acetylcholine and plays an important role in the termination of acetylcholine activity at cholinergic synapses in various regions of the nervous system. The inhibition of acetylcholinesterase is frequently used to treat Alzheimer's disease. In this study, a merged BindingDB and ChEMBL dataset containing molecules with reported half-maximal inhibitory concentration (IC50) values for AChE (7032 molecules) was used to build machine learning classification models for selecting potential AChE inhibitors from the SistematX dataset (8593 secondary metabolites). A total of seven fivefold models with accuracy above 80% after cross-validation were obtained using three types of molecular descriptors (VolSurf, DRAGON 5.0, and bit-based fingerprints). A total of 521 secondary metabolites (6.1%) were classified as active in this stage. Subsequently, virtual screening was performed, and 25 secondary metabolites were identified as potential inhibitors of AChE. Separately, the crystal structure of AChE in complex with (-)-galantamine was used to perform molecular docking calculations with the entire SistematX dataset. Consensus analysis of both methodologies was performed. Only eight structures achieved combined probability values above 0.5. Finally, two sesquiterpene lactones, structures 15 and 24, were predicted to be able to cross the blood-brain barrier, which was confirmed in the VolSurf+ quantitative model, revealing these two structures as the most promising secondary metabolites for AChE inhibition among the 8593 molecules tested. A consensus analysis of classification models and molecular docking calculations identified four potential inhibitors of acetylcholinesterase from the SistematX dataset (8593 structures) 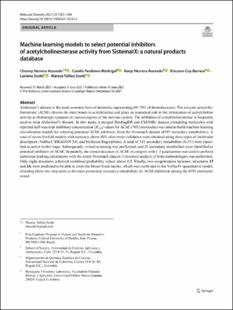