Blastocystis is frequently reported in fecal samples from animals and humans worldwide, and a variety of subtypes (STs) have been observed in wild and domestic animals. In Colombia, few studies have focused on the transmission dynamics and epidemiological importance of Blastocystis in animals. In this study, we characterized the frequency and subtypes of Blastocystis in fecal samples of domestic animals including pigs, minipigs, cows, dogs, horses, goats, sheep, and llama from three departments of Colombia. Of the 118 fecal samples included in this study 81.4% (n = 96) were positive for Blastocystis using a PCR that amplifies a fragment of the small subunit ribosomal RNA (SSU rRNA) gene. PCR positive samples were sequenced by next generation amplicon sequencing (NGS) to determine subtypes. Eleven subtypes were detected, ten previously reported, ST5 (50.7%), ST10 (47.8%), ST25 (34.3%), ST26 (29.8%), ST21 (22.4%), ST23 (22.4%), ST1 (17.9%), ST14 (16.4%), ST24 (14.9%), ST3 (7.5%), and a novel subtype, named ST32 (3.0%). Mixed infection and/or intra -subtype variations were identified in most of the samples. Novel ST32 was observed in two samples from a goat and a cow. To support novel subtype designation, a MinION based sequencing strategy was used to generate the full-length of the SSU rRNA gene. Comparison of full-length nucleotide sequences with those from current valid subtypes supported the designation of ST32. This is the first study in Colombia using NGS to molecularly characterize subtypes of Blastocystis in farm animals. A great diversity of subtypes was observed in domestic animals including subtypes previously identified in humans. Additionally, subtype overlap between the different hosts examined in this study were observed. These findings highlight the presence of Blastocystis subtypes with zoonotic potential in farm animals indicating that farm animals could play a role in transmission to humans 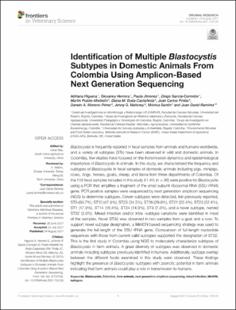