Background: There has been a long-standing debate over the taxonomic status of Rhipicephalus sanguineus sensu lato. Different studies worldwide have reported the occurrence of different well-defined lineages, in addition to Rhipicephalus sanguineus sensu stricto. To date, there are very few studies examining the diverse aspects of this tick in Colombia. We assessed the population structure and genetic diversity of R. sanguineus s.l. in eight departmental regions across Colombia. Methods: A total of 170 ticks were collected from dogs in different departments of Colombia. All specimens were morphologically compatible with R. sanguineus s.l. and subjected to genetic analysis. DNA sequences were obtained for the 12S rDNA, cytochrome oxidase I (COI) and internal transcribed spacer 2 (ITS2) markers. A concatenated set of all mitochondrial markers was also constructed. Next, maximum likelihood phylogenetic trees were constructed using the sequences generated herein and sequences available in GenBank. Finally, we assessed different summary statistics and analysed population structure and divergence with Fst and Dxy and demographic changes with Tajima's D and Fu and Li’s statistical tests. Results: Analysis of the 12S rDNA and COI revealed that all R. sanguineus s.l. specimens collected across different regions of Colombia clustered within the tropical lineage. Micro-geographical analyses showed that the tick population from Amazonas formed a distinct cluster separated from the other sequences, with moderate Fst and Dxy values. However, no signs of a robust population structure were found within the country. The results of Fu’s FS tests, together with the haplotype networks and diversity values, signal a possible population expansion of this tick species in Colombia. Conclusions: Evidence provided herein supports the tropical lineage as the main circulating lineage in Colombia, exhibiting a general lack of genetic structure except for the Amazonas region 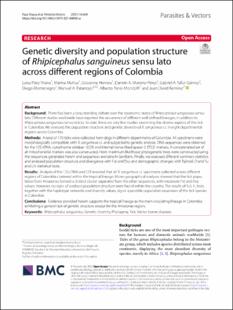