MnFe2O4 solid nanospheres (MSN) were synthesized by a solvothermal method. The sample was then used as catalyst to activate potassium peroxymonosulfate (PMS) for the generation of sulfate (SO4.–) and hydroxyl (HO.) radicals to degrade and mineralize para-nitrophenol (PNP) in water. The aim of this work was to study the influence of operational variables on the activity of the MSN catalyst to degrade and mineralize PNP, the PMS consumption kinetics, the leaching of metal ions, and the removal of nitrogen. Results showed that 100% of PNP (0.1 mM) was removed in MSN/PMS system by degradation within 7 h at a dosage of 4 mM of PMS, 0.5 g L−1 of MSN, 40 °C, and pH0 5.8. The reusability of the MSN catalyst was also studied, and a PNP degradation pathway was proposed. The PNP degradation followed a pseudo-first-order kinetic model and the activation energy obtained was 37.1 kJ/mol. Under the above standard reaction conditions, the catalyst showed a good performance after five catalytic runs, with a degradation efficiency that exceeded 98%, and removed around 70% of total organic carbon in each run. The excellent reusability and long-term stability was verified by the characterization of fresh and used catalysts. The sole degradation products were maleic and fumaric acids and nitrate and nitrite ions. 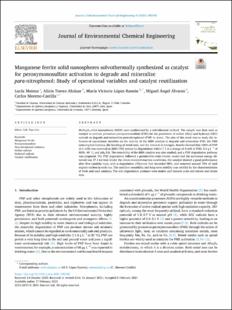