Chagas disease is caused by the kinetoplastid parasite Trypanosoma cruzi, which is mainly transmitted by hematophagous insect bites. The parasite’s lifecycle has an obligate intracellular phase (amastigotes), while metacyclic and bloodstream-trypomastigotes are its infective forms. Mammalian host cell recognition of the parasite involves the interaction of numerous parasite and host cell plasma membrane molecules and domains (known as lipid rafts), thereby ensuring internalization by activating endocytosis mechanisms triggered by various signaling cascades in both host cells and the parasite. This increases cytoplasmatic Ca2+ and cAMP levels; cytoskeleton remodeling and endosome and lysosome intracellular system association are triggered, leading to parasitophorous vacuole formation. Its membrane becomes modified by containing the parasite’s infectious form within it. Once it has become internalized, the parasite seeks parasitophorous vacuole lysis for continuing its intracellular lifecycle, fragmenting such a vacuole’s membrane. This review covers the cellular and molecular mechanisms involved in T. cruzi adhesion to, recognition of and internalization in host target cells. 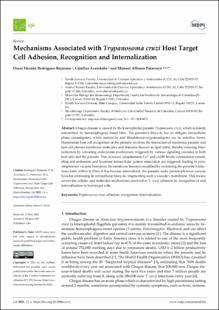