Cannabis sativa worldwide is known for its medicinal properties for different pathologies, in our country the use of Cannabis for medicinal and / or scientific purposes was recently approved under Decree 613 of 2017, since then there have been several doctors in our country who they have been prescribing it. Because at present there is no study on the use of medicinal Cannabis, this work was developed in order to generate a study of use type prescription - indication of medicinal Cannabis to provide information about the conditions of use of this medicine. This study was carried out at an IPS in the city of Bogotá. When performing the characterization of the population treated in this IPS during 2019-2020, a total of 201 reported cases of patients prescribed with medicinal Cannabis were found, where 151 cases met the inclusion criteria (described in this study) of which 84 cases belong to the female sex and 67 correspond to male patients; Most of these cases occurred in the 65 to 90 age range. On the other hand, it was found that the patients most prescribed with medicinal Cannabis were those with the following diagnoses: Unspecified pain, Fibromyalgia, Autism and Alzheimer's. 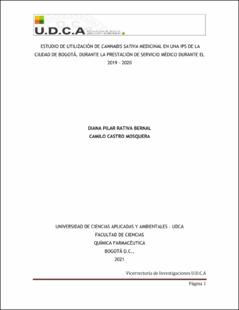