Apoptosis can be triggered in two different ways, through the intrinsic or the extrinsic pathway. The intrinsic pathway is mediated by the mitochondria via the release of cytochrome C while the extrinsic pathway is prompted by death receptor signals and bypasses the mitochondria. These two pathways are closely related to cell proliferation and survival signaling cascades, which thereby constitute possible targets for cancer therapy. In previous studies we introduced two plant derived isomeric flavonoids, flavone A and flavone B which induce apoptosis in highly tumorigenic cancer cells of the breast, colon, pancreas, and the prostate. Flavone A displayed potent cytotoxic activity against more differentiated carcinomas of the colon (CaCo-2) and the pancreas (Panc28), whereas flavone B cytotoxic action is observed on poorly differentiated carcinomas of the colon (HCT 116) and pancreas (MIA PaCa). Apoptosis is induced by flavone A in better differentiated colon cancer CaCo-2 and pancreatic cancer Panc 28 cells via the intrinsic pathway by the inhibition of the activated forms of extracellular signal-regulated kinase (ERK) and pS6, and subsequent loss of phosphorylation of Bcl-2 associated death promoter (BAD) protein, while apoptosis is triggered by flavone B in poorly differentiated colon cancer HCT 116 and MIA PaCa pancreatic cancer cells through the extrinsic pathway with the concomitant upregulation of the phosphorylated forms of ERK and c-JUN at serine 73. These changes in protein levels ultimately lead to activation of apoptosis, without the involvement of AKT. 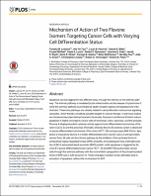