This study reports six HR-HPV types' infection prevalence discriminated by species and multiple infection in unvaccinated Colombian female adolescents, as well as some factors modulating the risk of infection. HPV DNA for six high-risk viral types was identified in cervical samples taken from 2,134 12-19 year-old females using conventional generic and typespecific PCR. Binomial logistical regression analysis was used for modelling HR-HPV infection and multiple infection risk. The interaction between variables in a stepwise model was also included in such analysis. Viral DNA was detected in 48.97% of the females; 28.52% of them had multiple infections, HPV-16 being the most frequently occurring type (37.44%). Cytological abnormality prevalence was 15.61%. Being over 16 years-old (1.66: 1.01-2.71 95%CI), white ethnicity (4.40: 1.16-16.73 95%CI), having had 3 or more sexual partners (1.77: 1.11-2.81 95%CI) and prior sexually-transmitted infections (STI) (1.65: 1.17-2.32 95%CI) were associated with a greater risk of HPV infection. Having given birth was related to a higher risk of infection by A7 species and antecedent of abortion to less risk of coinfection. Where the females in this study came from also influenced the risk of infection by A7 species as female adolescents from the Andean region had a lower risk of infection (0.42: 0.18-0.99 95%CI). The presence of factors related to risky sexual behaviour in the study population indicated that public health services should pay special attention to female adolescents to modify the risk of infection by high-risk HPV types and decrease their impact on this age group. 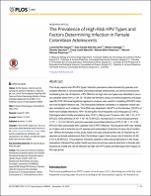