The stomach bacterium Helicobacter pylori is one of the most prevalent pathogens in humans, closely linked with serious diseases such as gastric cancer. The microbe has been associated with its host for more than 100,000 years and escorted modern humans out of Africa. H. pylori is predominantly transmitted within families and dispersed globally, resulting in distinct phylogeographic patterns, which can be utilized to investigate migrations and bioturbation events in human history. Latin America was affected by several human migratory waves due to the Spanish colonisation that drastically changed the genetic load and composition of the bacteria and its host. Genetic evidence indicates that independent evolutionary lines of H. pylori have evolved in mestizos from Colombia and other countries in the region during more than 500 years since colonisation. The vacuolating cytotoxin VacA represents a major virulence factor of the pathogen comprising two domains, p33 and p55, the latter of which is essential for binding to the host epithelial cell. The evolution of the VacA toxin in Colombia has been strongly biased due to the effects of Spanish colonization. However, the variation patterns and microevolution of the p55 domain have not yet been described for this population. In the present study, we determined the genetic polymorphisms and deviations in the neutral model of molecular evolution in the p55 domain of 101 clinical H. pylori isolates collected in Bogotá, a city located in Andean mountains characterized by its high gastric cancer risk and its dominant mestizo population. The microevolutionary patterns of the p55 domain were shaped by recombination, purifying and episodic diversifying positive selection. Furthermore, amino acid positions 261 and 321 in the p55 domain of VacA show a high variability among mestizos clinical subsets, suggesting that natural selection in H. pylori may operate differentially in patients with different gastric diseases. 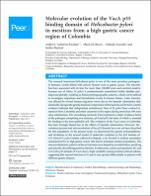