To obtain a scientific basis and justification of plant domestication in the use of Ageratina gracilis, we did an in vitro study of the anticancer potential of extracts and fractions from its leaves and inflorescences. Firstly, cytotoxicity was evaluated against five human tumorigenic cell lines by MTT assay. Subsequently, the chloroformic fractions, considered the most cytotoxic were tested for genotoxicity by comet assay, morphological effects were analyzed by fluorescent microscopy, cell cycle arrest by flow cytometry and early apoptosis induction through fluorescein-5-isothiocyanate (FITC) labeled Annexin-V assay. Non-polar extracts with IC50 values of <53μg/ml showed a high cytotoxicity. The highest cytotoxicity was achieved by chloroformic fraction from petroleum ether extract of leaves and inflorescences and chloroformic fraction from ethanolic extract of leaves, displaying a significant inhibition of cell viability particularly on A549 cells with an IC50 value of 25.9 μg/mL. Chloroformic fractions caused a high percent of DNA damage above 60 percent on A549 and MDAMB-231.The fractions also induced G1/S phase arrest of the cell cycle in A549 cells, furthermore it was confirmed the apoptotic activity chloroformic fraction from petroleum ether extract of inflorescences and chloroformic fraction from ethanolic extract of leaves on those cells by Annexin-V assay. These preliminary results indicate that A. gracilis has an antiproliferative activity against cancer cells, being a starting point for forthcoming studies about the antineoplastic activity and its domestication conditions 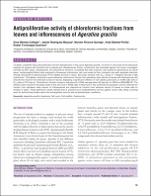