STUDY QUESTION Is it possible to identify new mutations potentially associated with non-syndromic primary ovarian insufficiency (POI) via whole-exome sequencing (WES)? SUMMARY ANSWER WES is an efficient tool to study genetic causes of POI as we have identified new mutations, some of which lead to protein destablization potentially contributing to the disease etiology. WHAT IS KNOWN ALREADY POI is a frequently occurring complex pathology leading to infertility. Mutations in only few candidate genes, mainly identified by Sanger sequencing, have been definitively related to the pathogenesis of the disease. STUDY DESIGN, SIZE, DURATION This is a retrospective cohort study performed on 69 women affected by POI. PARTICIPANTS/MATERIALS, SETTING, METHODS WES and an innovative bioinformatics analysis were used on non-synonymous sequence variants in a subset of 420 selected POI candidate genes. Mutations in BMPR1B and GREM1 were modeled by using fragment molecular orbital analysis. MAIN RESULTS AND THE ROLE OF CHANCE Fifty-five coding variants in 49 genes potentially related to POI were identified in 33 out of 69 patients (48%). These genes participate in key biological processes in the ovary, such as meiosis, follicular development, granulosa cell differentiation/proliferation and ovulation. The presence of at least two mutations in distinct genes in 42% of the patients argued in favor of a polygenic nature of POI. LIMITATIONS, REASONS FOR CAUTION It is possible that regulatory regions, not analyzed in the present study, carry further variants related to POI. WIDER IMPLICATIONS OF THE FINDINGS WES and the in silico analyses presented here represent an efficient approach for mapping variants associated with POI etiology. Sequence variants presented here represents potential future genetic biomarkers. STUDY FUNDING/COMPETING INTEREST(S) This study was supported by the Universidad del Rosario and Colciencias (Grants CS/CIGGUR-ABN062-2016 and 672-2014). Colciencias supported Liliana Catherine Patiñós work (Fellowship: 617, 2013). The authors declare no conflict of interest. © The Author 2017. Published by Oxford University Press on behalf of the European Society of Human Reproduction and Embryology. All rights reserved 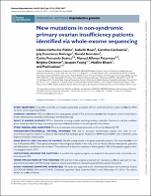