To be able to survive, Helicobacter pylori must adhere to the gastric epithelial cells of its human host. For this purpose, the bacterium employs an array of adhesins, for example, AlpA. The adhesin AlpA has been proposed as a major adhesin because of its critical role in human stomach colonization. Therefore, understanding how AlpA evolved could be important for the development of new diagnostic strategies. However, the genetic variation and microevolutionary patterns of alpA have not been described in Colombia. The study aim was to describe the variation patterns and microevolutionary process of alpA in Colombian clinical isolates of H. pylori. The existing polymorphisms, which are deviations from the neutral model of molecular evolution, and the genetic differentiation of the alpA gene from Colombian clinical isolates of H. pylori were determined. The analysis shows that gene conversion and purifying selection have shaped the evolution of three different variants of alpA in Colombia. 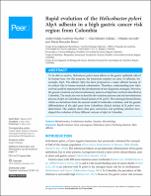