Introduction: Teaching cardiac anatomy, due to its complexity, is a constant challenge for professors and students. This situation has led to the creation of new pedagogical strategies, including the use of 3D rendering, to improve learning. Objective: To assess the impact of 3D rendering as a digital instrument on cardiac anatomy learning. Materials and methods: An experimental study was carried out with two groups of students from a medical program randomly selected. Each group consisted of 40 students; one was the control group (3HB) and the other, the study group (3HA). Both groups attended lectures and practices in the dissection hall of the university, that is, they received training using the traditional methodology. The control group received training using the traditional methodology, as well as instruction using anatomy atlas texts, while the 3HA group received training using the 3D Heart-tomy software, a three-dimensional virtual instrument. Results: Theoretical and practical tests were analyzed, and an opinion survey was conducted, which allowed finding that the students of the 3HA group had better academic performance in the theoretical test than the control group. Conclusion: Didactic and digital 3D media facilitate the understanding of the location of the anatomical structure, and works as a pedagogical tool, although it does not replace practices in the dissection hall. 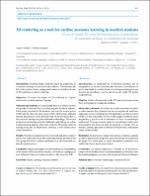