Apparent origin of glossopharyngeal, vagus and accessory nerves: An aspect to consider in human neuroanatomy teaching

In various neuroanatomy texts and articles related to this area of knowledge, there is a conceptual vacuum associated with the precise sites where the roots of the cranial nerves emerge. The objective of the study was to establish the exact location of the apparent origin of the glossopharyngeal, vagus and accessory cranial nerves in the medulla oblongata of the human being 120 human brainstems, previously fixed in formalin solution at 10 % were assessed, the location where such nerve roots emerge was identified by direct examination and once the piamater was removed at both right and left sides as it has been stated in the literature. It was found that in 100 % of the studied brainstems their nerve roots emerge on average at about 2.63 mm behind the retro-olivary groove, different to what has been stated in the literature. Glossopharyngeal, vagus and accessory human nerves do not emerge directly from the retro-olivary groove, as commonly reported; instead, they emerge behind the said groove, specifically in the retro-olivary groove area, where they form a continuous line of nerve roots. 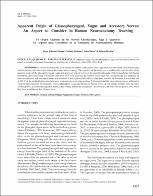