PreviousNext
Ver ítem
JavaScript is disabled for your browser. Some features of this site may not work without it.

Acute toxicity evaluation of the ethanolic extract from leaves and flowers of chromolaena perglabra (b. l. robinson) king & h. rob.

At present, there is a great variety of plant species widely distributed in different geographical regions worldwide, with phytopharmacological potential; however, its indiscriminate use has limited access to vegetal resources by the population in general and the scientific community. Additionally, the lack of toxicological studies that provide knowledge on the safety of their use makes the problem more critical. According to traditional knowledge, the species that belong to the genus Chromolaena, have a high pharmacological potential, but currently, there are no studies that validate traditional use and safety. Therefore, the purpose of this investigation was to evaluate the acute toxicity of the leaf and flower extract of Chromolaena perglabra (C. perglabra) in mice. To develop this aim, 25 female ICR-CD1 mice were divided into two groups with three and two subgroups respectively, to which they were administered intraperitoneally 125, 250, 500, 1000 and 2000 mg/ kg of the ethanolic extract of leaves and flowers of C. perglabra; another 5 mice were administered the vehicle (control group); 72 hours after inoculation, they were sacrificed for histopathological study (macroscopic and microscopic). An increase in size was observed with mild lymphoid hyperplasia in the spleen and toxic hepatitis in all the animals, the rest of the organs analyzed were in normal conditions. 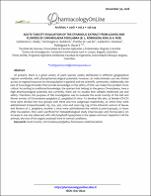