In the past few years, relative frequencies of malaria parasite species in communities living in the Colombian Amazon riverside have changed, being Plasmodium vivax (61.4%) and Plasmodium malariae (43.8%) the most frequent. Given this epidemiological scenario, it is important to determine the species of anophelines involved in these parasites’ transmission. This study was carried out in June 2016 in two indigenous communities living close to the tributaries of the Amazon River using protected human bait. The results of this study showed a total abundance of 1,085 mosquitos, of which 99.2% corresponded to Anopheles darlingi. Additionally, only two anopheline species were found, showing low diversity in the study areas. Molecular confirmation of some individuals was then followed by evolutionary analysis by using the COI gene. Nested PCR was used for identifying the three Plasmodium species circulating in the study areas. Of the two species collected in this study, 21.0% of the An. darlingi mosquitoes were infected with P. malariae, 21.9% with P. vivax and 10.3% with Plasmodium falciparum. It exhibited exophilic and exophagic behavior in both study areas, having marked differences regarding its abundance in each community (Tipisca first sampling 49.4%, Tipisca second sampling 39.6% and Doce de Octubre 10.9%). Interestingly, An. mattogrossensis infected by P. vivax was found for the first time in Colombia (in 50% of the four females collected). Analysis of An. darlingi COI gene diversity indicated a single population maintaining a high gene flow between the study areas. The An. darlingi behavior pattern found in both communities represents a risk factor for the region’s inhabitants living/working near these sites. This highlights the need for vector control efforts such as the use of personal repellents and insecticides for use on cattle, which must be made available in order to reduce this Anopheline’s abundance. 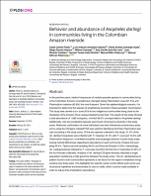